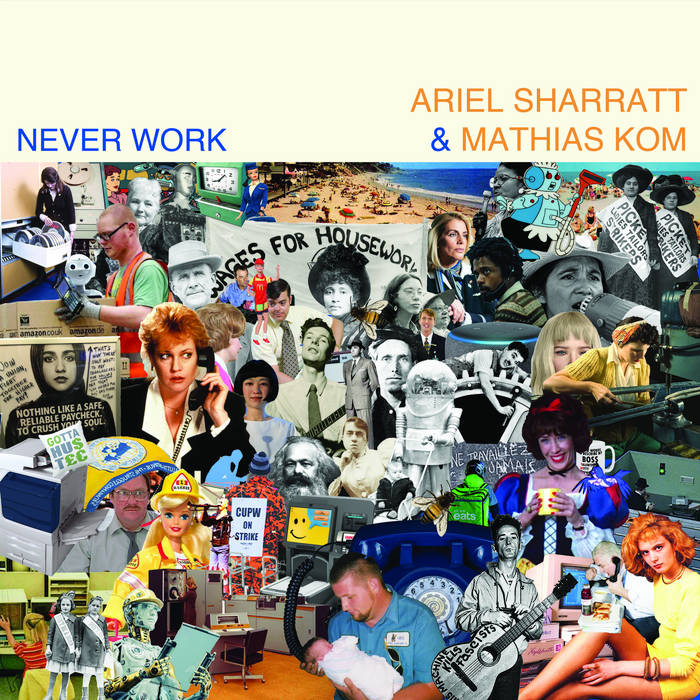 leamary how did the rich convince us that working is the point of life? love this album. eat the rich! never work! goodnight! Favorite track: I Don't Mind Failing.

moped Here's to Alexa, Siri, and all our other digital comrades! Favorite track: Rise Up Alexa.

Discovering this album made my week. While I'm always excited to hear new music from Kom & Co, there is something special in this batch of songs. Rise up! It is our time down here! Favorite track: The Rich Stuff.
more...

Work is changing. Robots are replacing us. Capitalism is fracturing. With their second duo album "Never Work," Ariel Sharratt and Mathias Kom (of Canadian garage-folk band The Burning Hell) ask what work songs might sound like in a future where the nature of labour itself is so uncertain. Accenting the acoustic elements of old-school folk revivals with electronic interference, Never Work takes cues from labour activists and Situationist pranksters to explore the gig economy, side-hustles, tech feudalism, class war, unionized digital assistants, rebellious self-service checkout machines, and fully automated luxury communism. Some are songs about workers, some are songs for workers, but most are both at once. Simultaneously earnest and wry, the songs on Never Work are a protest playlist for our collective journey towards oblivion or the beach.

With a rescheduled tour in November and December 2020, Ariel and Mathias will be traveling through Europe, the UK and Canada with a special stage show featuring a robot drummer (voiced by an Amazon Alexa) which they've built as a nod to musical automation. Their eventual hope is to replace themselves with homemade robots as well, who can go on tour in their place. Never work!